On How the Worst Experiences Can Be the Best Lessons 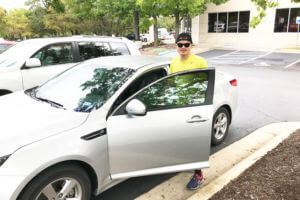 Meet Jake. Jake is a brand new student in the CLE program in Austin, TX this fall. In the last month, Jake has moved away from his family to a new city where he is now living in his very own apartment for the first time and getting acclimated to a new community full of new people. So far, things are going great! Well, mostly great.

Jake is a smart and responsible young man. Before coming to CLE, his many accomplishments already included earning his high school diploma, getting his driver’s license, maintaining a long-term job at Chick-fil-A, and successfully completing his first year of community college courses in his hometown. Jake chose to move to Austin to pursue his academic and career goals in his dream field of Production (Radio, Television, and Film). In addition to academics, Jake also knew he wanted to work on social skills and independent living skills that would be important for him to be successful as an independent adult. After visiting CLE last spring, Jake felt confident that our program was the right fit to help him reach his goals. So, to Austin he came!

On Thursday morning of his first week of classes at Austin Community College, Jake received a phone call. He noticed the area code was from his hometown, so he figured even though he didn’t recognize the number it was probably someone that needed to reach him. When Jake answered, the voice on the other end of the line told him that his car insurance was about to expire. The voice spoke ominously, warning Jake that if he did not update his insurance immediately, he would no longer be registered to drive his vehicle, convincingly using scare tactics to manipulate and persuade Jake that he must provide his debit card information to them to ensure that he was following the law and keeping his car insurance up to date.

Jake is a smart and responsible young man. He knew that he was responsible for sticking to a budget and not over-spending, so he told the voice that he could not afford the thousand-plus dollar price tag initially quoted, instead agreeing to an initial charge of only $500.

And, because one of the many hats worn by CLE staff members is the ‘Protective Watchdog’ hat, Jake’s student advisor began to ask some questions and quickly realized that something seemed fishy. Over the next hour or so, Jake’s student advisor and then the center director sat alongside Jake to support him as he completed the many steps needed to ensure his bank account was now secure.

As Jake received support from CLE to navigate this situation, he realized his mistake in providing his bank account information to the caller and was understandably shaken and visibly distressed. Jake was worried that he—and his family—might lose a significant amount of money due to his error. As often happens when someone takes advantage of our trust, Jake was left with an unsettled, even violated feeling at the realization that someone was willfully dishonest with him in an effort to steal his money.

However, due to his willingness to communicate and work with his CLE team, Jake’s story worked out okay in the end. With staff support, he was able to resolve the situation within a little over an hour, receiving confirmation from the bank that his account would be refunded and there would be no long-term loss. Jake felt like a huge weight had been lifted—it was quite a rollercoaster of emotions in a short amount of time! And it was at this point that we were able to review what he had learned from the experience and how he would use that lesson to guide his actions in the future.

At CLE, one of the principles on which we stand is that allowing young adults to make mistakes and experience the natural consequences of their choices is perhaps the strongest teaching tool there is. We believe in this approach so much that it is built into the CLE program, where students have a level of independence that allows them to make their own choices, and where they also have the benefit of a wraparound support system in the form of their CLE staff team that can help them navigate and learn from these mistakes. As with Jake’s situation, the CLE team walks side by side with students when struggles arise and support them through the process as they:

It has been said that experience is the best teacher, and the worst experiences teach the best lessons. At CLE, we believe this to be true because our experience has shown it to be so again and again. We understand that this means that a student’s time at CLE will not be 100% smooth sailing all of the time. There will be some turbulence and bumps in the road and CLE students will inevitably experience some periods of discomfort and even distressing feelings when mistakes happen, just as all adults do when we’re learning to navigate the world. But we have also seen how these chapters end for students who stick it out and how much growth and maturity can be gained as a result. We are grateful for the opportunity to walk alongside our students as they navigate these experiences and life lessons that are so valuable for helping them achieve their ultimate goal of being able to live safely and successfully as an independent adult.

Oh, and one last thing… I neglected to mention before that in addition to his other great qualities, Jake is also a super nice guy. He demonstrated this once again when just a few minutes after he got his situation resolved with the bank, he said “you guys should tell my story to other new students when they start the program, because this could happen to anyone!”

Thanks, Jake, for sharing your story and for having the good will to want to ensure that others can learn from your mistake and hopefully avoid it for themselves in the future!